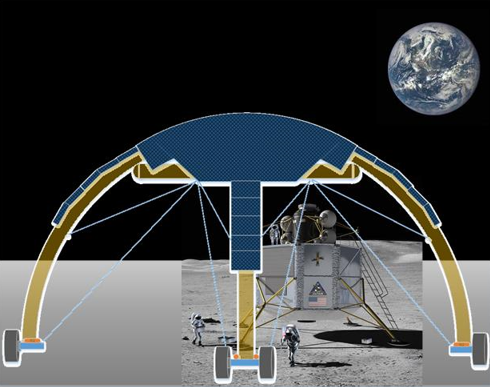 NASA is seeking to challenge the GrabCAD Community to design a mobile lunar gantry based on a structural framework of inflatable structural components.

Deployment and operations of a lunar base requires an effective system to unload payloads from various lander configurations and transport those payloads to the Artemis base camp that, for safety reasons, will be located one or more kilometers away from the landing site.

This contest is in support of a NASA concept study called the Advanced Lightweight Lunar Gantry for Operations (ALLGO). The goal of the ALLGO study is to develop an innovative, low-mass unloading system based on inflatable structural components that can be tightly packaged and easily deployed on the lunar surface. This system could be scaled up to operate with very large landers that have a high payload deck. An ALLGO mobile lunar gantry system could also be used for other routine operations at the Artemis base camp such as integrating large components or transporting ISRU materials for processing.

A successful outcome of this contest is a 3D model of an effective mobile lunar gantry with a primary structure composed of inflatable components such as beams, arches, and tori. In addition, a basic structural analysis is desired that will be used to help assess the designs and potentially help in prototyping a subscale system in a follow-on to the ALLGO study. Contest submissions must include:

1. CAD models of a deployed mobile lunar gantry utilizing inflatable components for much of the primary structure (Submissions to be provided in STEP or IGES
file formats).
2. Include a concept for packaging the mobile lunar gantry system that shows a feasible method of deployment from a packaged state on a lunar lander. This may be provided in 2D drawings or as a 3D model.
3. Provide an estimate of system mass and packaged (stowed)/deployed size.

Renderings of the system in operation will be used to help communicate the concept and potentially be used in follow-on proposals for continued development of the
concept.

An estimate of the maximum loads that the mobile lunar gantry submission can accommodate, and an estimate of power consumption for operation of loading/transporting are encouraged.

For this contest, a basic concept has been provided as a starting point. The concept is expected to be deployed from a lander without direct human support. Additional
features of a mobile gantry system would likely include:
1. Solar arrays that provide power to charge on board batteries and avionics
2. Modular wheel assemblies to reduce part count
3. Hoist system for lifting payloads.
4. Inflatable structure that consists of an inner layer bladder with low gas permeability and structural restraint/shielding outer layers that support large loads and protect the inflatable structure against the harsh lunar environment (UV, extreme temperature, dust, micrometeoroids and orbital debris (MMOD) impact). Candidate bladder materials include, but are not limited to, a Kapton ® HN polyimide, Essar Stretch TM polyimide and silicone coated Vectran TM . Candidate outer layer materials include but not limit to Vectran TM , Kevlar ® , Nomex ® , Zylon ® , Beta Cloth and Nextel TM . Additional MMOD shields such as Whipple shield can be installed for a sensitive area.
5. Gas regulation system (it is likely the internal pressures would be greatly reduced when not in use to reduce gas leakage).
6. Adjustable cable stays or material connections to provide additional structural support.
7. External Power Connector: The system must survive the lunar night and may have a connector to an external power source where it would dock when not in use.
8. Wireless Communication System: The system is expected to be tele-operated from a pre-deployed local wireless network which will manage communications from the Earth if human operators are not at the Artemis base camp.
Assume that the mobile lunar gantry will operate in an area with rocks/craters less than 0.25 meters in height/depth and with slopes less than 5 degrees. Multi-wheeled versions may offer mobility advantages over the 4 wheeled concept provided for more rugged lunar terrains.
Ideas that should be excluded:
1. Avoid concepts that require direct human contact or custom robotics to deploy.
2. Avoid concepts that are difficult or cumbersome to operate.
3. Avoid concepts that are extremely complex as this adversely impacts fabrication, reliability, and increases risk.
4. Avoid concepts that have significant safety issues (i.e. high pressures, susceptibility to tipping during operation, etc.).

There are several commercial companies offering structures that incorporate inflatable components in their designs.
These systems may be applicable for use a mobile lunar gantry.
An example paper that discusses the structural loads on inflatable structures: https://www.researchgate.net/publication/235213999_Air-Inflated_Fabric_Structures

The images below represent an example concept of a mobile lunar gantry based on an inflatable structure.
Challengers are free to use this as a starting point or to design a completely different configuration. 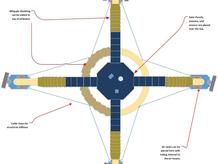 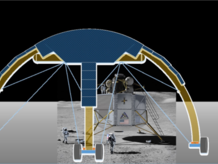 This contest supports the Advanced Lightweight Lunar Gantry for Operations feasibility study. This study is sponsored by the NASA Space Technology Mission Directorate’s Center Innovation Fund through the Langley Research Center’s Office of Chief Technologist. The study will help inform lunar mission architects who are selecting the
systems that will be used to support the Artemis Base Camp.