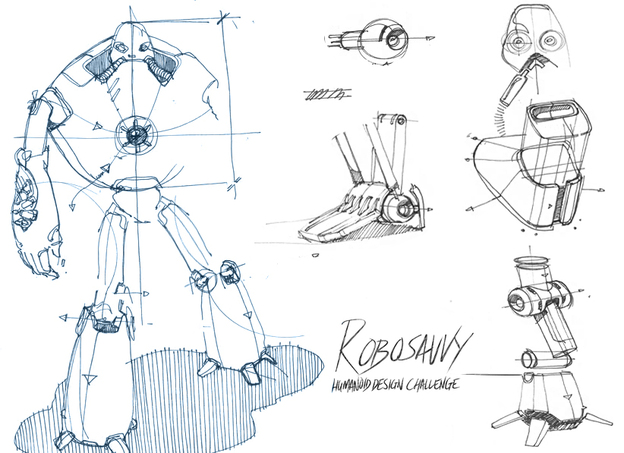 Robosavvy is looking for your help in gathering fresh ideas for the design of a new humanoid robot designated for entertainment and education. Our objective is to launch a new open-source humanoid robot that will look great and will be agile and smart at a reasonable cost.

Comparable education and research humanoid robots cost over $10,000 due to their plastic molded shell parts, expensive actuators and closed-source business approach. We want this to be an open-source robot that will outperform its rival platforms while keeping the cost of materials to about $1,000. We will achieve this by utilizing materials and fabrication methods available to anyone. Materials include aluminum sheet and 3D printed parts for structure, vacuum formed polycarb exterior shell, servos for actuation and low cost electronics including Raspberry Pi for brains.

⇒ The exterior of the robot needs to hide the metal frames and servo boxes as much as possible, exposing a streamlined exterior with a distinct look and features
⇒ The robot’s range of movements with its shell should allow it to walk, crawl and get up from laying on front and back. The acting servos should have enough torque to be able to work against gravity in each of these motions
⇒ The design should incorporate additional range of motions including torso rotation to allow crawling, hands with grasping capabilities and pan/tilt motion of the head

We expect to have to do some modifications to the chosen design to make the robot perform the featured range of motions because we realize the designer may not have all the practical experience designing humanoid robots. We will adapt the shell if needed for polycarb vacuum forming. We will also handle the electronics involved in power management and servo control, in addition to developing the core open-source software to make the robot move, including ROS support, simple python scripts and physics simulation.

⇒ Actuation should be based on Robotis AX12 and AX18 servos. Smaller servos can be used in order to actuate body parts that have little weight and don’t need the high torque servo. For example pan/tilt on the head and grasping action in the hands. These servos can be chosen from the Hobbyking catalogue (ex1, ex2). The Robotis servos are designed for robotics, have great price/size/performance and they can be daisy-chained and controlled with a tiny USB board. However, they may be too bulky for the pan/tilt motion of the robot’s head or the hand with grasping action, hence the small PWM RC servos can be used and we will add a designated USB interface board to control them from the embedded Linux.
⇒ The structure of the robot’s skeleton should be made with aluminum sheet of 1.5mm thickness. See the Bioloid GP and Darwin-OP or any Robo-One robots for examples of how to use aluminum sheet as structure for humanoid robots. Aluminum folded brackets models should easily convert or be made available as flattened pieces to allow precise cutting and bending.
⇒ Some structural parts can also be designed for fabrication using desktop 3D printing or CNC where aluminum sheet pieces don’t easily address a structural challenge.
⇒ The number of servos and the aluminum structure will determine the size, degrees of freedom and agility of the robot. The design should consider the torque limitations of the servos. For example, the knee servos should be able to lift the upper body of the robot and the feet should be able to tilt the robot during a walking gait. More servos, more weight and more height will limit the ability of the lower body joints to handle the weight and momentum.
⇒ The height of the Darwin-OP with its more powerful servos is 45cm (3kg), the Bioloid with its plastic brackets is 40cm (1.7kg) and the GP with its metal brackets is 35cm (1.6kg). The design may incorporate double knee joint to assist in giving more lifting power to the upper body.
⇒ The servos may directly actuate a joint using a metal bracket, or indirectly through other types of linkages or other transmission of actuator effect such as pulleys and Kevlar/braided fishing wires (ex) to allow better mobility, stability, or streamlining the joints to create a more biologically inspired look.
⇒ To allow the robot to grasp, one or more small servos as described before, can be used to actuate two or more fingers. (ex1, ex2) Grasping can be achieved with a single servo and two or more spring-loaded fingers. It can use more servos to achieve more mobility at the cost of weight. Wrist and arm rotation should also be considered to allow the robot mobility to write with a pen.
It is not necessary to place every screw and bolt in the model where their place is obvious such as holding the servo horn to the metal bracket.
⇒ The design can incorporate additional inexpensive and easily sourced off-the-shelf elements such as springs, wires, machine screws/nuts/spacers, magnets, bearings or RC suspension spring-damper and push-rods. The design can incorporate custom 3D printed parts and also machined parts if necessary.
⇒ Ensure that the robot parts can actually be assembled and that there are no parts or screws that are occluded in a way that will prevent them from quick assembly.
⇒ The robot needs to have an accessible area designated for electronics including Raspberry-Pi or Beaglebone Black and some extra padding space around for wires and additional electronics such as an IMU, voltage regulator, USB connectors and speakers.
⇒ The robot needs to host a 3-cell Lipo battery that can be easily replaced. Any size and shape battery found here can be used weighing up to 150g and having at least 1200mah capacity 15C or higher.
⇒ A miniature web camera should be present on the robot's head or chest. It can be any miniature webcam that's easily purchased on amazon or ebay, preferably with hardware JPEG encoding. The webcam will typically be stripped off its plastic shell to save space.
⇒ The look of the robot is primarily defined by the exterior shell. The robot's body should be covered by a thin vacuum formed colored polycarbonate sheet shell to hide the metal framed body and servo boxes and give the robot a more streamlined look such as that of Asimo, QRIO, NAO, Manoi, Kirobo or Darwin-OP. The thickness of the Polycarb in the design should be 0.5mm. We will try to make the shell work with as thin a sheet as possible (to make it lighter) while ensuring it is not too weak at the contact points with the metal structure and able to handle any stress caused by falling. RoboSavvy may need to adjust the shell to make it vacuum formable. For example, it may need to be split into two halves and adjusted to create nice seams due to the split.
⇒ The shell design should not obstruct the motion range of the robot's joints.
⇒ The robot may incorporate LEDs anywhere on the body. The shell may also include light masking areas or areas that diffuse LED light underneath to give the shell lighting effects such as in Tron and Iron Man.
⇒ Anyone with access to a hackerspace workshop with the following hobby tools should be able to fabricate the open-source humanoid robot:
- desktop 3D printer for printing parts in PLA and ABS
- CNC to cut out aluminum sheet and MDF to cut out a - mold for vacuum forming
- pan/break machine to bend the aluminum sheet
- vacuum forming setup to clamp, heat and vacuum polycarb sheet on top of the mold

The winning design of a humanoid robot will be custom built and sent to the designer (valued in parts and labor at $4,000) + $800 cash

$450 cash and GrabCAD shirt and bottle

$250 cash and GrabCAD shirt and bottle

The jury will consist of Robosavvy and GrabCAD experts.