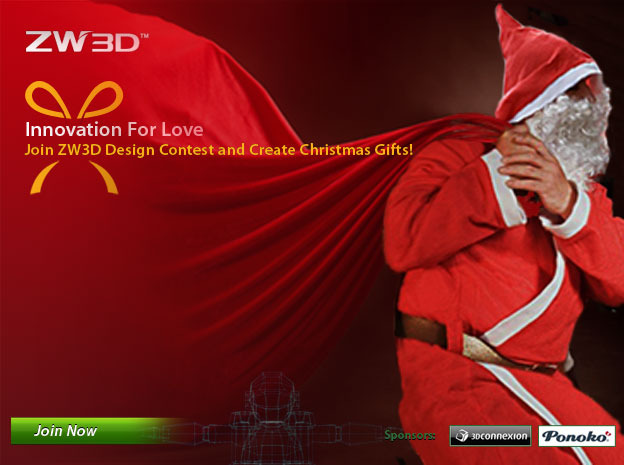 Design Christmas gifts for your friends and family with ZW3D.

Christmas is just around the corner! The standard tradition is to share gifts – but share designs? That’s the idea behind this Design Challenge. ZW3D wants you to come up with the ideal Christmas Gift. Don’t just make a model of Santa Claus – think of something unique and original. A mechanical Reindeer? A Christmas Tree Star made completely of gears? And for all of your ideas, you will receive a 3DConnexion Mouse and a little prize money to buy those real gifts. Or perhaps get your design 3D printed instead?

Prizes will be judged on a variety of criteria, including quality (of course) but also creativity, popularity and ease of manufacturing.

ZW3D CAD/CAM can be downloaded for a free 30-day trial at http://www.zwsoft.com/en/products/zw3d.html

The Most Creative Design

The Most Pragmatic Design

ZWSOFT is a world-reowned CAD/CAM solutions provider for the AEC and MCAD industries, with over 320,000 clients in 80 countries. ZWSOFT's products, ZWCAD and ZW3D, have satisfied the needs of 2D and 3D designers for over a decade. For more info, please refer to www.zwsoft.com

Ponoko is an online service for manufacturing. People can distribute, download and customize and manufacture product designs by using its making system.

3Dconnexion offers the ultimate selection of 3D mice for navigation and motion control in CAD applications, compatible with more than 100 software programs.