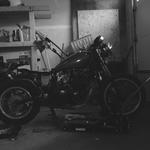 Hi everyone, I made this project:

Could you provide me your thinkings about it?

Must it have awd? Motorcycles of any fuel source need to do wheelies, burnouts, and donuts.

Although the front suspension does retain the "retro" look it should have a telescopic fork as most motorcycles of a 20th century design do for a good reason. The braking system will also warrant the ability of independent actuation, there are times/conditions (limited traction) you don't want to apply the front brake at all. If this motor uses hydrogen fuel in a combustion chamber how will the resultant heat be managed? Air cooling for ICE's isn't the best idea, especially on a slow moving boulevard cruiser design. If this is a school project the CAD modeling itself is nice and I'll applaud attempting to utilize modern technology concepts but some of the basic functions need further thought. The devil is always in the details. Not throwing rocks, just trying to be helpful.

Having been in the hydrogen generation industry as a designer / fabricator / welder I found it can be tricky to handle, but has an energy density roughly three times an average Lithium Ion battery pack, and the weight of the fuel cell and fiber wrapped composite 350 BAR (5000 PSI) hydrogen pressure tanks are on average 1/14th as heavy. Another advantage is the difference in recharge time: for batteries it can take hours, but a hydrogen recharge takes little more time than filling a twenty gallon gasoline tank. Depending on the range you want to get from a single hydrogen charge the size increases linerally with respect of the miles desired. As an example a 300 mile range would require about 100 litres of space, equivalent to a 26 gallon gas tank. And unlike a the conforming shape of a gas tank the pressure bottle has to be cylindrical, somewhat limiting the packaging. There is a way around that: make the frame, or a goodly portion of it, a pressure bottle. Of course a crash of sufficient violence could rupture the frame tubing, possibly causing an "unintended rapid disassembly", (otherwise known as "BOOM!") if the hydrogen ignites with disastrous consequences to not only your pride and joy but also you.

There is a downside to AWD. Specifically the weight of the front motor and speed reduction unit in the wheel hub is completely unsprung, which will negatively affect suspension compliance and steering effort. The same can be said about a rear hub mounted motor with the exception of the steering effort, but also unless there is a torque link from the stator of the motor to the frame instead of the swingarm the rear will tend to squat when off the throttle, and rise when power is applied. It is preferable to mount the motor in the frame from a wheel control point of view.

On the regenerative braking: yes, the motor(s) are invariably rare earth permanent magnet type and will generate electricity when driven by the wheel(s) instead of being powered by the fuel cell, since there is no actual electrical energy storage on board it will have to be shunted off, unless it could be used to charge a bank of supercapacitors to give the motor(s) a sudden kick of high current, as much as 14KW (~18 HP), but it would not last for long.

I hope that helps.