How to 3D Print Jigs & Fixtures, Part 2: Designing for Print 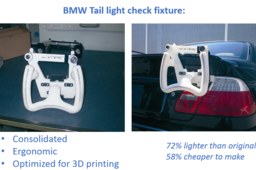 This is the second part of a four-part tutorial series on how to optimize your manufacturing jigs & fixtures for 3D printing. Today, we'll go over what to do in each design pass as you're optimizing your part, including specific steps to do in your CAD package, your print-preparation tool, and if you're bold, your FEA package.

Later installments of this series will deal with FDM material selection and post-processing for jigs & fixtures.