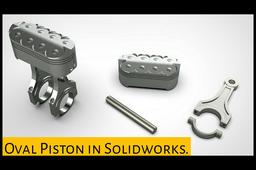 Hey designer,
In this tutorial i'll show you how to design (Honda nr500) "OVAL PISTON" in solidworks.
.
Some additional details about Honda nr500 oval pistons :

The Honda NR was a V-four motorcycle series started by Honda in 1979 with the 500cc NR500 Grand Prix racer that used oval pistons. This was followed during the 1980s by a 750cc endurance racer version known as the NR750.