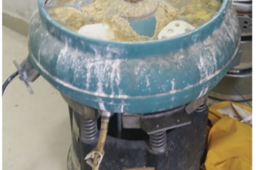 Polishing PolyJetTM 3D Printed parts in a vibratory finishing system (also known as a tumbler) improves their surface finish by removing minor surface irregularities and sharp edges. With this process you can save time and manual labor, especially when dealing with large quantities or complex models. A tumbler system can polish multiple parts, hands-free, in only a few hours, depending on the size of the parts and the tumbler. This method is usually performed on metal parts, but it was tested on PolyJet models from the Digital ABSTM and VeroTM material families and found suitable.