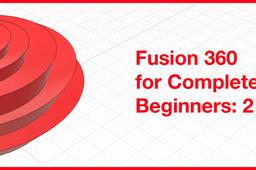 We will go over: Lofting/ loft feature and sweeps/ sweep feature in Fusion 360.

In the intro to Fusion 360 we went over sketches, extrusions, cuts and revolves. In this tutorial, I want to take it a step further to show you some of the more advanced tools you have at your disposal in Fusion 360. Now, logically, the next tool to show you is the sweep.