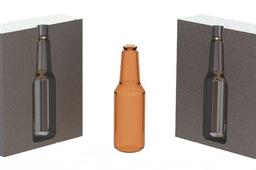 This is the basic tutorial of how to design a blow mould of a bottle. I have divided the tutorial in five parts. In this tutorial we'll learn these features:

First part of the tutorial consists of 3d modeling of a bottle, where we first create a sketch and then use revolved boss command for bottle modeling. Here we'll use some commands like fillet and shell. Later we apply appearance on it and render it.

Second part consists of mould designing of the bottle. Here we are using Combine tool to do so. Moulds can be designed in many ways for example core, indent, combine etc. After making molds, we'll create a cavity on the top of the mould for flow of material providing a draft of 3 degrees. In Mould making, we'll use features like extruded boss, mirror, combine, move, save body. It is a useful tool for saving bodies (solid bodies) separately.

Third part of the tutorial consists of Assembly of the mould. Here we use some basic mates coincident and concentric.

Last part consists of rendering of the assembly. We'll apply appearance to the assembly separately and then render it. Rendering usually takes time depending upon the speed of your machine so please be patient while rendering.