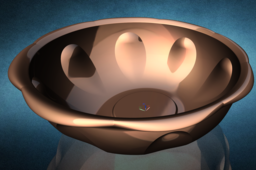 I built this very quickly, and that's probably going to be apparent, reading through this tutorial. So, this is a somewhat brief tutorial covering the design of a waskom or washing basin. This tutorial does assume that you have an intermediate level of experience and as such, does not cover every aspect of this build in detail. It is more of a, how to get from point 'A' to 'Z' type tutorial. No dimensions are shown, so if you are attempting to build your own, just use dimensions that look 'good' to you and create the shape(s) you prefer.

This was built in NX12, but I tried to build this such that anyone using NX6 or so should have all the tools used here. Hence, none of the newer conic fillets, etc.