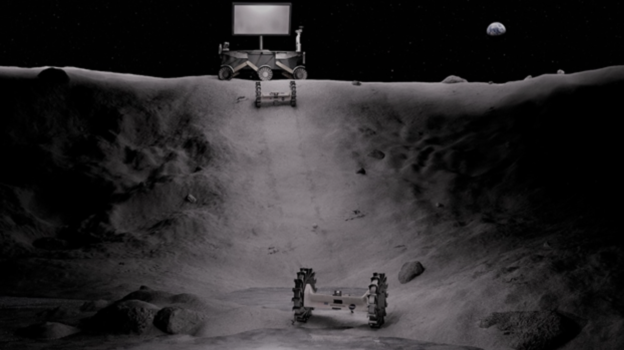 NASA is seeking to challenge the GrabCAD Community to design a mobile lunar heliostat that can be used to support operations at the Artemis Base Camp by redirecting solar energy where it is most needed. The Lunar Tele-Operated Rover-based Configurable Heliostat (Lunar TORCH) system serves as a cost effective multi-purpose tool for lunar operations by manipulating a critical resource (sunlight).


Potential uses include:
1. Concentrating/redirecting sunlight
a. On to existing solar arrays
b. On assets located in shadowed areas
c. Providing radiative heat for ISRU processing

4. Providing beacons for spacecraft and landers with vision navigation systems

The goal of this challenge is to develop an innovative low mass mobile heliostat that can be tightly packaged on a lander and easily deployed on the lunar surface. The basic configuration should be scalable to provide large amounts of solar energy where needed (i.e. ISRU systems located in permanently shadowed regions). The Lunar TORCH could also be remotely operated by ground control or Artemis astronauts and commanded where it is needed to support operations at the Artemis base camp.

It is expected that the heliostat subsystem will not have to be fully stowed again after deployment. However, the overall system must be mobile, which requires the heliostat structure to be robust enough to allow it to travel over rugged lunar terrain which includes steep slopes. Challengers can consider partially stowing the system or
including locking mechanisms to help with dynamic loads when the system is being relocated. The system will be parked while redirecting sunlight.

For this competition, the reflecting area of the heliostat should be a minimum of 10 square meters when deployed. On the lunar surface, 10 square meters of reflecting area can redirect over 13 kW of solar energy to a specific target. The heliostat subsystem should be able to continuously track the sun to illuminate a selected target without depending on the rover for rotation and elevation.

Design Notes: It is generally advantageous to have a higher reflecting area since it may provide line of sight advantages to the target (e.g. A rover operating in a crater). This can lead to a challenging engineering trade between structural, deployment, and mobility considerations. The design should also be scalable so that it can be tailored for different applications. The angular sweep on both axes should be at least 90 degrees to minimize the need to reorient the rover. Motors used for tracking will likely need to have heaters if they are in shadow, Thermal insulation blankets around sensitive components such as motors and gearboxes will likely be needed.

In addition to the reflecting area, it is expected the overall system will need 1 square meter of photovoltaics for electrical power. Since the solar panels should also track the sun it may be advantageous to incorporate the solar array into the heliostat’s reflecting system. During longer periods of darkness/night in its area of operation the heliostat should be able to traverse to a pre-deployed power source where it can obtain survival power for heaters on sensitive components. This could be with an inductive power coupling to reduce dust contamination issues on the connector. 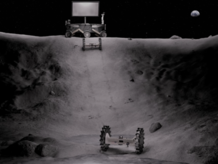 This contest supports NASA’s Lunar Surface Innovation Initiative. This study is sponsored by the NASA’s Prizes, Challenges, and Crowdsourcing Program and was selected through the competitive Crowdsourcing Contenders Call for challenge ideas. The study will help inform lunar mission architects who are currently selecting the systems that will be used to support the Artemis Base Camp.