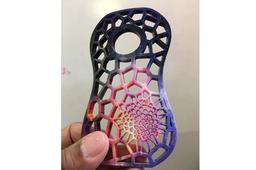 We show how to use Grasshopper and Rhino to automatically generate complex Voronoi structures ready for 3D printing.