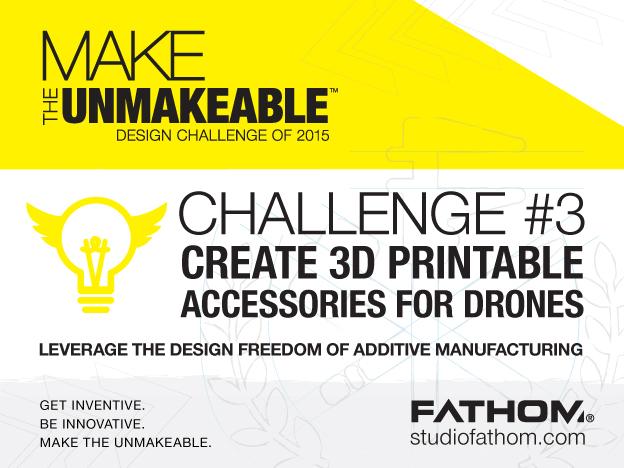 FATHOM is challenging designers and engineers to design 3D printable accessories for drones.

CHALLENGE 3 of 3: CREATING ACCESSORIES FOR DRONES

In the third Make the Unmakeable Challenge, leverage the unlimited design freedom of 3D CAD and additive manufacturing to design a exciting new drone accessory that demonstrates one or more of the following:


Your drone accessory must serve an impactful purpose in a specific industry. Examples include a drone accessory that is key in the delivery of concessions inside stadiums, drop off of medical supplies in dense urban areas, wildlife monitoring in remote locations, traffic spotting on congested roadways, distribution of retail purchases, or guidance of people in emergency evacuation scenarios. Please be aware that entries will be judged on originality, both aesthetic and mechanic. Designs should be mechanically sound. Traditional concepts will not be considered. Description of application is required.

Participants in the third round can use build off of a featured 3D printable drone by Sherif Manganas for this Make the Unmakeable Challenge. FATHOM is excited to highlight this designers great work and we are honored to use this design for our third and final challenge. Please note the file is available for download under Creative Commons—Attribution-NonCommercial License: HORUS

With this Challenge, we turn to the GrabCAD community—what can you FATHOM?

- $2,500 credit for 3D printing services from FATHOM production centers (includes PolyJet, FDM, and SLS technologies, excludes model finishing);
- Extensive press coverage through industry-leading publications;
- Featured in the FATHOM trade show booth at highly publicized events located all across the United States;
- The winners of each of the three (3) challenge Competitions will be assessed and evaluated by the Judges for the grand and ultimate prize, which will be announced in September 2015 (Updated: October): the ultimate Make the Unmakeable champion will win a (uPrint SE 3D printer by Stratasys) from FATHOM (value $15,900);
- Custom 3D printed trophy designed and 3D printed by FATHOM.

FATHOM is driven by advanced technologies that enhance our customers' product development process. We change the way products are being designed and manufactured by helping designers and engineers make the unmakeable, innovatively compressing industry standard lead-times so products go to market faster and more efficiently. Every day industry-leading companies leverage FATHOM'S 3D printing expertise to put satellites into orbit, electric cars on freeways, and a full spectrum of devices into people's hands and homes. The FATHOM team is uniquely blending additive technologies and materials with
legacy manufacturing methods so companies can go from concept to prototype to manufacturing in a way that wasn't previously possible. Our product portfolio includes professional 3D printers and manufacturing systems, prototyping and advanced manufacturing services, with design and engineering resources in support of these. We strive to be our customers' preferred partner by providing best-in-class equipment, services, and support.